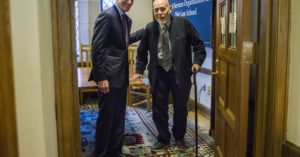 >> A 91-year-old gay veteran from Connecticut has won his legal quest to upgrade his discharge status to honorable.

H. Edward Spires of Norwalk was notified Friday morning that his application to the Air Force Board for Correction of Military Records was approved, eliminating the undesirable discharge designation that has marked his service record since he left the military in March of 1948.

In November, Spires and a group of lawyers at the Yale Veterans Legal Services Clinic filed a federal lawsuit against the Air Force seeking to upgrade his discharge status. They cited the repeal of the military's controversial « Don't Ask, Don't Tell » policy regarding gays and lesbians in the service.

Spires and his husband, David Rosenberg, are relieved to have the effort behind them, said Erin Baldwin, one of the law student interns representing Spires. Baldwin said she is unsure what persuaded the Air Force to agree to a change in Spires' discharge status at this point. « I'm not sure we can say with certainly but it was helpful that he had support from a lot of different places, » Baldwin said. « Ultimately we're just happy that the outcome was what we thought was just in this case. »

The Air Force Board's ruling is officially worded and contains no apology, Spires notes. It states that: « Sufficient relevant evidence has been presented to demonstrate the existence of an injustice. »

The board referred to Department of Defense guidance that requests to change a veteran's status to honorable should be granted when the original discharge is based solely on earlier policies that prohibited gay men and women to serve in the military, as long as there were no aggravating factors such as misconduct.

« Although we cannot conclusively determine the applicant was discharged for his sexual orientation, based on our review of the facts and circumstances in this case, it is our opinion his discharge more likely than not meets both conditions noted above, » the board stated.

« I'm very gratified for Ed Spires and his spouse for this decision corrects an incredible injustice," Blumenthal said. « I'm also hopeful and excited for others who were similarly unjustly discharged with less than honorable status simply because of their sexual orientation. I'll continue to fight for them. »

Spires joined the U.S. Army Air Force in 1946, at the age of 20. After completing basic training, he was assigned to be a chaplain's assistant at Lackland Air Force Base in San Antonio. His duties included typing letters to distressed families, playing the organ at Catholic Mass and setting up the chapel for services, according to the complaint. Within 18 months, he was promoted to the rank of sergeant.

Spires built a large group of civilian friends in San Antonio, many of whom were gay. But in those days, that was a risky proposition: In October of 1947, the commander called a meeting to « clean up the base of homosexuals, » the lawsuit states.

At an off-base Halloween party, Spires dressed up as the Oxydol « Sparkle, » from the ad campaign for a popular brand of laundry detergent. Someone at the party mistook his costume for drag.

Shortly afterward, Spires was summoned to to the judge advocate's office and asked if he was a « homosexual, » the complaint states. When Spires did not initially answer, the master sergeant « threatened to throw him into the stockade and tell the other prisoners that [he] was a homosexual."

« Over the course of an hour-long interrogation, the master sergeant repeatedly asked Mr. Spires if he was gay and requested information about his relationships with many people in the address book that the Master Sergeant confiscated from Mr. Spires's pocket, » the lawsuit states. Spires signed a statement saying that he had « passively participated in homosexual acts » in order to end the questioning but he refused to provide the names of other gay soldiers.

In the complaint, Spires described the ordeal as « horrific and unbearable. » Afterward, he was sent to a psychiatrist and, in March of 1948, he was given the « undesirable » discharge.

Following his discharge from the Air Force, Spires seldom mentioned his service. He destroyed all evidence of his time in the military including his dog tags and transcripts of his court martial. And when pressed, he usually said he was discharged for medical reasons.

« I could never mention my military service to my family, » Spires said, noting that many of those relatives are now dead.

The lawsuit is not the first time Spires has sought to change his discharge status. He first submitted an appeal in 2014, following the repeal of « Don't Ask, Don't Tell. » But the Air Force Board for Corrections of Military Records rejected the request, saying his personnel records may have been destroyed in a 1973 fire. Other efforts also fell short.

Spires suffered some medical setbacks in recent months, although his health is now stable. « I'm still recovering from pneumonia but every day seems a little brighter, » he said. « This is one thing less on my mind...I can smile again. »

With his husband, Spires planned to celebrate his honorable discharge this weekend but the snowstorm caused them to scrap those plans. Instead, the couple will mark the victory in Florida next month.