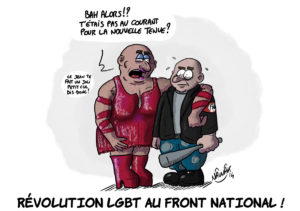 >> The deep rifts within Marine Le Pen’s far right movement in France have been exposed by the appointment of a senior gay activist as her “cultural” adviser.

The recruitment of Sébastien Chenu, founder of the GayLib movement in France, came shortly after the magazine Closer outed a senior figure in the Front National, Florian Philippot.

Although Mr Philippot’s sexual orientation was well-known in the Parisian political-media village, it was not generally known to FN grass-roots voters.

The two events have brought to the surface long-suppressed tensions within the FN – and the even wilder shores of the French far right – over an alleged “gay lobby” surrounding Ms Le Pen.

According to one FN official, Laurent Brice, Ms Le Pen has become a “gay icon” to many right-wing French homosexuals. They like her relative liberalism on social issues and adore her virulent opposition to Islam, which brands homosexuality as a mortal sin.

The problem is that much of the FN grassroots remains attached to the “traditional values” – including homophobia – expounded by her father, Jean-Marie Le Pen.

While Ms Le Pen rides high in the polls, she is untouchable. The events of the past few days suggest, however, that anger within the FN is growing.

The “capture” of Mr Chenu – previously an adviser to a former President, Nicolas Sarkozy – was furiously denounced by traditionalist members of the Front National’s political bureau on Friday. The rebellion was led by the former deputy leader of the party, Bruno Gollnisch, and by Marine Le Pen’s niece, Marion Maréchal-Le Pen.

The switchboard of the party’s headquarters at Nanterre in the western suburbs of Paris was swamped for two days with angry calls from FN members.

This website uses cookies to improve your experience while you navigate through the website. Out of these, the cookies that are categorized as necessary are stored on your browser as they are essential for the working of basic functionalities of the website. We also use third-party cookies that help us analyze and understand how you use this website. These cookies will be stored in your browser only with your consent. You also have the option to opt-out of these cookies. But opting out of some of these cookies may affect your browsing experience.
Nécessaire Toujours activé

Any cookies that may not be particularly necessary for the website to function and is used specifically to collect user personal data via analytics, ads, other embedded contents are termed as non-necessary cookies. It is mandatory to procure user consent prior to running these cookies on your website.